RUSH: Here's Pelosi at her press conference just a moment ago. She could not be more proud of what she has done.

PELOSI: One week later, Wednesday to Wednesday, that president was impeached in a bipartisan way --

PELOSI: -- by the House of Representatives -- 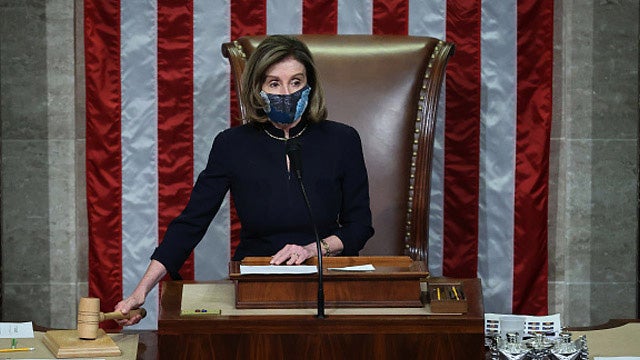 PELOSI: -- so urgent was the matter.

RUSH: You know, you better hurry up. You can't do this when he leaves office. You better hurry up with this. It's so urgent, she hasn't even sent it to the Senate yet. "They're working on taking this to trial, and when they do, you'll be the first to know when we announce that we are going over there."

She means to the Senate. "So urgent was the matter." They just want to be able to say they impeached Trump twice. No president's ever been impeached twice. They're doing everything they can to hammer this guy into a political and maybe even an actual death. I don't know. I have never seen anything like this.

And I'm telling you, folks, it means they are scared to death of the guy. They think that he's going to rise from whatever ashes they create. They know there are at least 74 million of you that voted for him who are not abandoning him. They had hoped to affect that, to create that. They haven't been able to, and they know it, and they're deathly worried about all this.

"Did CNN Accidentally Prove That Trump Did NOT Call for Violence at the Capitol?" It's a PJ Media story by Matt Margolis. It's so obvious. Trump was guilty before he even took the oath of office in 2016. The pattern of accusing Trump of heinous crimes that he did not commit is so well established that the presumption must be Trump is innocent of anything Democrats claim he did 'cause they haven't proved a damn thing.

So how long is it gonna be before Rasputin Jack bans this story on Twitter? "The political left and their allies in the mainstream media have gloated over the second impeachment of Trump. In record time, an article of impeachment alleging President Trump incited an insurrection at the U.S. Capitol were filed and approved by the House...

"But according to a new report from CNN, 'Evidence uncovered so far, including weapons and tactics seen on surveillance video, suggests a level of planning that has led investigators,'" i.e., the FBI, "'to believe the attack on the U.S. Capitol was not just a protest that spiraled out of control, a federal law enforcement official says.'

"This completely undermines the entire case Democrats made for impeaching Trump. CNN's story also seems to support other reports that that the FBI had warned Capitol Police a day before the assault that there was evidence that an attack on the Capitol was expected..."

A day before it. CNN reports that investigators were given a heads-up a day before that an assault was coming, long before Trump ever made his so-called insurrection speech. You're being lied to left and right by everybody on the left yet again. 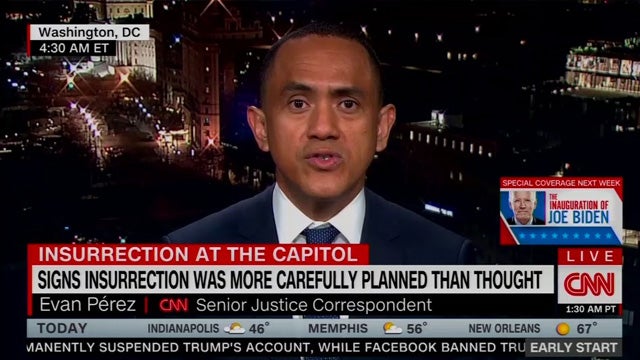 PEREZ: The indications that they're getting, certainly from the evidence that the FBI and prosecutors are now in possession of, indicates that there were people who left the rally where the president was speaking outside of the White House. They could not bring any weapons anywhere close to where the president was. They left a little early and then they went to go retrieve some of the items that then were used in the assault on the Capitol and that includes things like crowbars, we saw people with sledgehammers, people with climbing ropes and climbing gear. People who clearly had trained and know exactly how to use these to get into a building. And so that's what's leading law enforcement to increasingly believe that there had to be a greater level of planning than was first thought.

RUSH: This guy doesn't get it. He really doesn't get it. This is the story CNN accidentally -- Evan Perez does not realize what he reported. Trump didn't call for any of that. Somebody go get me the words of Trump demanding people get climbing equipment, go out and find crowbars, sledgehammers, climbing ropes, climbing gear. Trump didn't incite all that. He never once uttered any of those words. He never once asked people to engage in that kind of behavior. They even reported at CNN that people left before Trump's speech was even over, which blows up the timeline that Trump's speech caused all that happened.

Here is Robby Mook. Robby Mook was on CBS This Morning. He is the former Hillary Clinton campaign manager back in 2016. And the question: "Joe Biden wants to pass this massive relief package, but the Senate also has to consider an impeachment trial. How are they gonna do both?" The massive relief package is for COVID-19. So that's what they got on the table. Do they take care of the American people with COVID-19 relief or do they go get Trump again, impeach him for the second time? Here's the answer from Robby Mook.

MOOK: From what I'm hearing, they're gonna try to get this impeachment done as quickly as they responsibly can because I think there is tremendous urgency to get to work on the COVID relief packages, the president-elect said last night. This is not partisan, I think, in their minds, by the way. This is really about creating a consequence and accountability for the president inciting this riot. 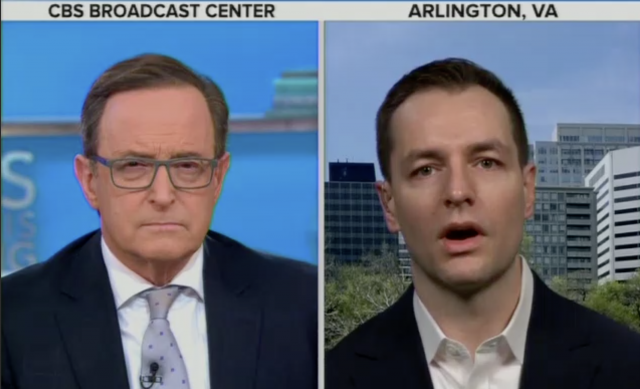 RUSH: Again, that's just all over the place incoherent. The president didn't incite anything. And CNN has inadvertently established that. But they've got their mantra. They have their narrative, and they are sticking to it. Do you believe -- this ought to awaken a whole lot of you out there. You know, it's not being reported, folks, and I'm not trying to be a downer here. There's a great story coming up I have here from Peter Navarro who just went off on the Fox Business Channel about what is being done to Trump. But I have to tell you that -- and you know it maybe better than I do. You know how bad it is?

I got two birthday cards here, and I told the staff, "Is there money in either? 'Cause if there's no money in here I'm not opening them." And there was no money. The staff is hurting. No money in my birthday cards. Let me get serious. The amount of unemployment, the number of businesses that have been destroyed in Democrat blue states -- oh. And how about this? Mr. Snerdley, have you heard about this?

Governor Cuomo in New York and Governor Lightweight in Illinois want to open up bars and restaurants inside service immediately. They don't even want to wait for Plugs' inauguration. Man, oh, man, was this predictable. New York City and Chicago, 372,000 small businesses destroyed, dead. Thank you, Democrats, 372,000 and counting. Now they want to open up bars and restaurants for inside service. They're saying things like this lockdown can't go on. We've gotta fix this. Well, this has been the case for over a year.

They've been chomping at the bit. They know they're destroying their own cities, but they did it as loyal foot soldiers in a way of getting back at, maybe damaging and harming Donald Trump. But man, oh, man, the state of the U.S. economy is sad. And it's all been done on purpose. It has all been done on purpose largely by Democrats. I know there were Republican votes for all of the spending on COVID relief, but it wouldn't have been necessary if they had not shut down the country.

It was never necessary to do that, but they did it. It was never necessary. Have you seen in the U.K. where they're talking about maybe masks forever? That people who live in the U.K. might face a mandate of wearing a mask for the rest of their lives. Such is the nature of the outbreak there. Now, you know what that means. That's just another step that the left is taking in trying to control people.

I mentioned earlier that the Democrats are gonna have to hurry if they want this impeachment article of Trump's to mean anything. Here's Professor Dershowitz this morning. NewsMax TV national report. Question: "Mitch McConnell said that he would not rush the trial in the Senate before the president leaves office. It would happen after Biden is inaugurated. So this might sound like kind of an odd question, Professor, but when Trump is no longer president, can he still be impeached?"

DERSHOWITZ: Categorically "no." The Congress only has authority over sitting presidents. The Constitution says that impeachment is to see if the president shall be removed. If the president can't be removed, Congress has no jurisdiction. If they could do that, they could impeach you and me. I'm over 35 and I can run for president. So can they haul me in front of the Senate, impeach me, and say, "Now, Dershowitz, you can no longer run for president"? Can they now impeach Barack Obama? Can they now impeach Bill Clinton? It's absurd. 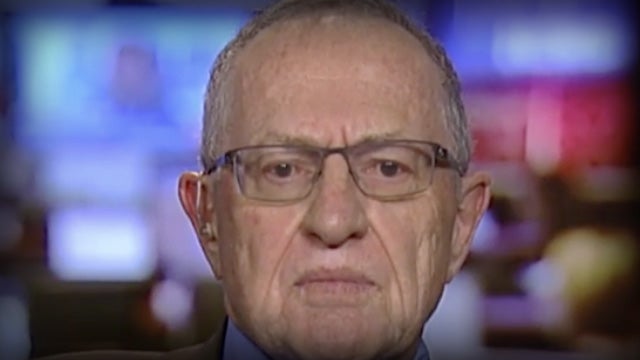 RUSH: Well, that's what they're trying to say they can do, but that's why I said they're gonna have to hurry because Dershowitz is right here. You can't impeach -- look at the Constitution. The whole impeach section does not talk about ex-presidents, former presidents. They can't do it. So that's why I say Pelosi had better hurry, but here's the Turtle, Cocaine Mitch, said that there isn't gonna be a trial before Biden is inaugurated, which means that all this is nothing but academics. (interruption) Yeah, that's true. Governor Cuomo, Governor Lightweight know that the cities -- New York, Chicago, Seattle, Portland - they're probably gonna be bailed out by the Democrat Congress.

Biden's proposal is $2 trillion in new spending. The vast majority of that goes to bailing out Democrat cities. You knew this was gonna happen, which is why Biden can't even agree to a $2,000 check. Only $1,400 'cause they've gotta have the money, which we don't have anyway, to bail out the cities. Never mind Biden promised $2,000 throughout his campaign, $2,000 to every American. Now it's down to $1,400 'cause they gotta bail out these Democrat cities who were very loyal and did everything they were asked to do in terms of damaging, harming, destroying, Donald Trump.

About The Rush Limbaugh Show